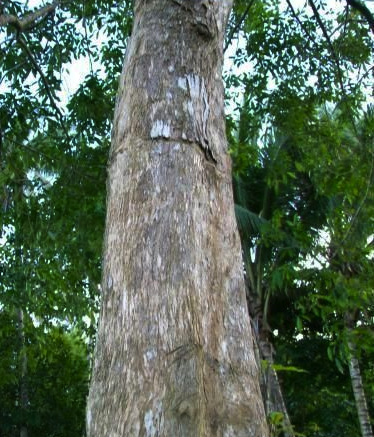 I’ve called my granddaughter, the one who enjoys my stories the most, to join me this afternoon; there is one story I would like to tell to her, and to my favorite tree – a big one with branches cascading downward into a canopy, and sporting a low lying branch one can comfortably sit or even sleep on. It is rather funny looking and its leaves are always rustling in the wind. Whenever I go there, I take the outside route that I always prefer: not through the house and out the backdoor, but through the narrow path at the right side of the house into the old play area at the back, where, if one comes by on a sunny afternoon, one will be greeted by the sight of kids running under soft sunlight streaming down through branches, the ground mottled with shadows, and a drizzling of leaves to welcome me.

I still visit them, our trees. I would sit underneath them for hours on end to bask in their presence, to accept the quiet understanding and comfort they offer when I need it, or to listen for the secrets that only they can smile about.

The trees always welcome me back.

“You’re looking a fine green today, hija,” he said as he dragged himself out of the front door and onto the porch.

“You should sun yourself here, Lolo.”

“Thank you, hija, but I’ve already had my share of the sun earlier,” he replied as he sat in his big chair.

Things remained normal in our part of town that day. A friend, fresh from a trip outside the country, was back to selling his trinkets right outside his house. Another neighbor, a very interesting old pair and among our very good friends, had just gotten themselves a cute little pup that they showed me a day earlier when my grandpa and I went to visit. They waved as they passed. The street was littered with people who were out for a walk on that lazy Saturday afternoon.

Most summer days were spent this way in my grandparents’ house. I liked visiting, and their house was near enough that I could do it often. It felt like a trip out of town, what with it being so spacious. They had a beautiful bow window; and with four acacias and a gmelina standing behind the old house, one can only imagine how wide the place looked to a girl of thirteen years. My cousins, friends, and I often played out back – it was the largest place on the street, after all; add to that the two acacias that had been kind enough to grow a low branch for us kids to climb and sit on, and grace us with a rain of leaves when they were in agreement with whatever serious plans children came up with.

If I wasn’t running around and reading my written stories to the trees, I would sit with my grandfather on the porch and listen to his. I have read many books in my brief lifetime, and heard many stories, but my grandfather remains to be, in my opinion, among the best tale spinners I have ever heard. He was tall and formidable-looking, but also a chatty old one, my grandpa. He would pluck some stories from memory, or effortlessly conjure one out of thin air. Sometimes, he would relate to me the wildest adventures he had had when he was younger, but would not reveal to me which ones were true. Because of him, my family had taken on the habit of gathering in the early evening to share our stories because I was always eager to retell what stories I’d heard from my grandpa. In these sessions, my mother would tell me which were true accounts and which were fiction, and the next day, I would barge in on grandpa to tell him that I knew he made up which particular bit. Afterwards, he would let out a hearty and contagious laugh. Then we would sun ourselves out on the porch as we normally did, and fill the day with even more talk.

“Do you recall the story of my father’s great-great grandfather?” he asked me.

“The house, yes.” I remembered this one well. He’d told me a hundred times, but I didn’t mind his repeating it in the least.

“That’s right. His son Ambungan…” he began. I knew the story very well. Ambungan was among the most well known of the young men of his time (and one of Lolo’s claims to fame was that he got his good looks from him). He was exceptional at making houses for other people, and the time came when he had to make one for him and his wife Mayang. So one day, Ambungan went to approach his father who was standing beside his wife in their then unused plot of land to ask permission to use his wood. It had been a few years since his father’s turning; if his father agreed to help Ambungan build the house, this was to be his last visit.

A moment later, Ambungan was given a rain of leaves in reply. Gratefully, Ambungan stood and waited, but after a few minutes, he wondered why this dry rain hadn’t stopped; he looked up and saw that his father was already shedding his leaves; so was his mother.

“And that is what our big old house is made of – the wood of our ancestors,” I finished.

Then Lolo fell silent. He tilted his head, and craned his neck a bit as if listening to a whispering in the wind. “Yes, yes, I know,” I heard him whisper back.

I could not catch what he seemed to be hearing. Whatever these inaudible whisperings were, I knew that it was very much a part of who I was, but one that I was years away from confronting.

My grandfather always said that when one is called back to the earth, one hears the earth singing. And it never calls anyone who is alone.

“I wish to stand beside your grandmother for a few years at least before anyone does anything. Tell your father that, you hear?” he said as he stood up to walk.

“Where are you going, Lolo?” This was a stupid and hopeless question, I realized. I knew. At the same time, I was surprised at his nonchalant, almost eager tone. I did not like what was happening, but at this point I realized I had no choice.

“Follow me, hija, I’ll show you my last story.” His left leg dragged heavily behind him as he struggled his way across the porch, down the steps, and around the corner of the house. In the past months, Lolo could hardly bend his joints without effort. If he was in pain, he tried his best to conceal it. We’d been telling him to use the cane, but he adamantly refused. “What for?” he’d say. “I can walk fine. Besides, I’d want to move around as much as I can, while I can, in any way I want.”

He lumbered towards where my grandmother had been standing for about two years now. “Hello there, langga,” he greeted the gmelina tree.

Then my grandfather began to take his clothes off; his skin was a very pale green freckled with brown all over, and his joints had turned to bark.

I knew that nothing else was required of me but to watch all of it until it was finished. Through it, I had to endure his grunts, sharp intakes of breath, his limited mobility; being a first time witness, I stood to help.

“No, hija, you sit there and wait,” he said, with a firmness and resolve that he rarely showed. It was a stark contrast to the ragged figure that was in front of me.

He then handed me all his clothes, which I could not fold as I should as I looked up intermittently to watch him walk very slowly towards a spot beside Lola. I had to sit still with Lolo’s clothes beside me until it was all over.

I looked up. Then, as if just having come from a random afternoon at the porch, he said, “It’s your turn to tell the stories. Your friend who sells trinkets, what’s his name? He’s a good fellow; you can start telling your stories to him. Now, don’t cry, I’ll grow a sturdy branch for you to sit on like some of the others did.”

The sky had begun to bleed pink and indigo up east that faded into a dark blue towards the west. There was a soft breeze blowing around us that afternoon. The trees swayed quietly. They looked as if they were dipping their branches lower, reaching out to me and speaking through their rustling. I stopped crying. I was not alone, after all, so why should I cry?

My grandfather smiled, closed his eyes, and began to take root.

Chai graduated with a degree in Mass Communication at the University of the Philippines – Cebu, learning a little too late that she actually wanted to make music instead. She is primarily a songwriter who has yet to put out her material, and dabbles a bit in other forms including short stories and annoyingly chatty emails. She is a member of a local open group called The Really Bad Poets, and an improvisational theatre group called Performing Arts Kolektib. Currently she is Cebu-based and works as an online copywriter. The Turning is officially her first short story.