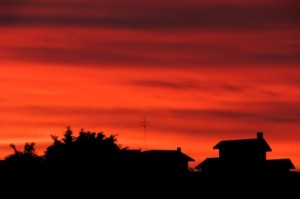 That morning, when they awoke, Julietta had a bad feeling. Nothing she could put a figure on, just a feeling. The sky, for one thing, was different: a strange pewter color. And normally, at that hour of the morning, just a little after sunrise, she could still hear the birds. But today there was nothing.

Her husband rolled over on the bed beside her and groaned. “Is Alex up yet?” he asked.

“I don’t think so,” Julietta answered.

“Better get him up, he’s got a long way to drive down the coast.”

Julietta hated it: the few times their son drove north to visit them, her husband always wanted him gone, as early in the day as possible, to “avoid traffic.” She decided she’d make breakfast first. Then she’d wake Alex.

She padded slowly down the stairs in her woolly socks. Why was the sky so — funny looking? Had it always been that way? Shouldn’t she have noticed it before? The houses of her neighbors across the street were shuttered and silent.

Something made her look up, and she thought she saw a giant hand move across the sky. It was just a moment, a glimpse. She shook her head, as if to clear it of cobwebs.

“Here, Snooky, here, Snooky,” she said, calling for the orange and black tabby they’d adopted a year ago. The cat’s head poked out from around the kitchen counter. Julietta laughed and scooped it up.

They had breakfast. Alex had the hood of his car up. He had a worried look on his face. His car was a 92 Civic with almost 200,000 miles on it. Julietta wished that they could afford to get him a better car, but now, after losing her administrative position at the university, and all the economic uncertainty in the Valley, this was not the time.

“You think we should take it to the mechanic?” she asked. She was still in her robe, but she didn’t care. All of the neighbors knew her and had seen her in her robe many, many times. She was old, her chest concave and flat. She had long ago ceased to care about things like appearances.

“Nah, I think it’ll be OK,” Alex said. “Besides, Alicia and I have a date for the spring musical. She’ll kill me if I’m late.”

Alex gave her a look.

Julietta went back inside the house and came out with an armful of freshly washed sheets and towels. “Here,” she said. “I noticed you didn’t seem to have enough of these the last time we were there.”

The sky, why did it bother her so much?

“And where are the birds this morning?” Julietta mused. She was starting to think of camels and deserts. What odd things occurred to her sometimes!

Then she saw something move very quickly across the sky. Whoosh! And then it was gone.

“What?” her husband said. He was still tinkering under the hood of Alex’s car.

“Oh, something went right across the sky — zoom! But now it’s gone.”

“What musical are you watching?” she asked.

“Oh! That reminds me of La Boheme.” Remember, we took you to the opera when you were in high school?”

The car sprang to life suddenly. It positively roared.

“You need coolant,” Alex’s father said. “And there’s a slow leak in the radiator. Don’t forget to keep checking.”

He got into the car. He waved. His car was a speck. He was driving away so fast! Then he was gone.

Julietta and her husband went back inside the house. She resumed her reading: some book about the ice age: she imagined the rivers filling with anti-freeze. What a thought!

Then she heard the sound of a plane flying overhead, very low. She looked outside the window and saw old Mrs. Piper in her front yard, looking up.

Donkeys, Julietta thought. Donkeys and desert. She shook her head. Silly. I should probably take a nap.

Where had her husband gone? He loved to tinker in the garage, so perhaps that was where he went. She lay back on the couch and closed her eyes.

When she awoke, the world was black. She was choking, on what she didn’t know. She called out. No one answered. Was her husband missing? She got up from the couch. “It’s me! It’s me!” she called.

What a lonely feeling, to be alone in the dark. She felt her way to the kitchen and tried the light. Nothing. She nearly tripped and fell over Snooky, cowering in a corner.

“Oh, poor baby,” she murmured, scooping the cat up in her arms. “You poor baby.”

The room began swaying. “Oh, oh, oooooh,” Julietta said, trying to balance herself on the kitchen counter with one arm. She could see the chandelier in the dining room — or at least the glass shards of the chandelier, since the bulbs were unlit — swaying wildly.

At that moment, she knew she was alone. Utterly and ineffably alone. There would be no husband coming home tonight.

Her mouth was dry. She felt her way to the refrigerator and yanked it open. No light there either, but she knew where the water dispenser was.

The last time her son had an accident, he’d scraped the guardrail of one of those bridges that go over the creek. How old was he then? Eighteen, nineteen? She looked at the living room, trying to make out the dim red glow of the phone, to see if it was blinking. But there was nothing.

Then she heard sirens. Many, many sirens. They seemed to be coming at her from all sides. She cowered. Then she decided: she’d run across the street to Mrs. Piper’s. Mrs. Piper had two sons in Iraq. She had an American flag planted in concrete on her front lawn. Mrs. Piper was strong; she would know what to do.

Slipping into the sneakers she always kept by the front door, Julietta cradled Snooky and ran. Then she knocked and knocked. Waited. Knocked some more.

Finally, she saw a glow behind the glass window of the door. The door swung open, but only a few inches. Mrs. Piper peered out. She was holding a glass with a candle sticking in it.

“Mrs. Piper,” she began. “It’s me, your neighbor from across the street.”

“What? I don’t understand? What is going on?” Julietta asked.

“Shhh,” Mrs. Piper said, ushering her inside. “It’s still in the daytime, but the animals are moving. Can’t you hear them?”

Julietta slid past Mrs. Piper and into the hallway. She was shaking. She saw that the house was lit by candles. A cake sat on the kitchen counter.

“Is it your birthday, Mrs. Piper?” she asked.

“My daughter is away,” Mrs. Piper said.

“Your eyes are a little scratched up,” Mrs. Piper said.

Julietta said, “What?” Mrs. Piper pointed the way to a bathroom, just off the hallway. Julietta looked at herself with the light of a candle Mrs. Piper had set by the sink. True enough, there were small scars around her eyes. Worse, her face looked like a map of hunger and distraction.

“And now what shall we eat?” Mrs. Piper was saying to herself, as Julietta emerged from the bathroom.

Julietta was thinking of discos, of dancing with a boy in the dark and of feeling his hot breath against her ear. But now it was too quiet. She began weeping.

If only she could keep the facts straight in her head: her son had gone off to Santa Barbara, her husband had gone to the garage, she had gone to sleep on the living room couch. When she opened her eyes, she thought the ceiling was covered with glow-in-the-dark stars. She ran to the kitchen and stumbled into Snooky. She was wearing flannel pajamas and a robe and socks and running shoes. She kept thinking of asteroids and meteors and wondered if it would still be possible to get her son back. Perhaps he hadn’t been so far away when whatever it was that happened happened. Perhaps he’d only gotten as far as Salinas. Wouldn’t he then have turned his car straight around and gone home? Wouldn’t he?

They each took a chair and faced each across the kitchen table, the cake between them. Snooky was still on Julietta’s lap but seemed to show no interest in food. She simply lay, as if comatose. Through Mrs. Piper’s kitchen window, Julietta thought she saw wisps of clouds moving backwards. Far off, somewhere, were a whole bevy of airplanes. Her arms felt numb, her brain felt numb.

Mrs. Piper looked at her and smiled. “I was a nurse,” Mrs. Piper said.

“This is probably going to hurt a little bit.”

By then Julietta couldn’t stop. She walked right into it. Her death. She knew it but she couldn’t stop it. The others, what had happened to the others?

But Julietta knew: this was the only possible outcome. In fact, she was grateful that no one she loved had been killed in front of her: she didn’t mind so much the mess of her blood or what noises she made while what had to be done was done. Her life, strangely, had always appeared to her as an abstraction.

It would have been worse, infinitely worse, to think of her son in the same position. With him, at least, she could still imagine a possible future.

—
Marianne Villanueva grew up in the Philippines and now lives in the San Francisco Bay Area. She was a Fellow in the Stanford University Creative Writing Program and has written three collections of short fiction: Ginseng and Other Tales From Manila (Calyx Press), Mayor of the Roses (Miami University Press) and The Lost Language (Anvil Press of the Philippines). She is at work on her first novel, set in World War II Bacolod.

The photograph, “Fire Sky” was taken by Christian Meyn, and was taken from his portfolio on FreeDigitalPortfolios.net following the site’s terms of use.

5 thoughts on “The Departure”